When first introduced, Hachiken reveals he's an intellectual introvert; he's often timid, shy, shrewd, and silently competitive against others in academic achievement. Raised in an atmosphere where his father demanded excellence and was bullied by others, he shows fear of social disapproval for his own thoughts and feelings; he was cowardly to stand up for his ideals and either ran away and/or found a place to hide to be at peace. At first, he was not popular and was considered an anomaly to others as he's the one of the rarest few students to attend Yezo High School without any career interest in agriculture nor an heir to a farm. However, he quickly earned recognition amongst his peers as one of the top performing students, despite having no agriculture background.

Through his own feelings about raising livestock and working on projects like a campus brick-oven pizza party, making bacon, and organizing various events, he became a popular student amongst his peers as someone to refer to for tutoring, knowledge, and helping others in their time of need (champion for underdogs). Hachiken is unknowingly a trend setter, as his work became the prelude to starting a fad in homemade oven brick-fired pizzas and the student body buying the pork they raised to create their own bacon and sausages. Unfortunately, his popularity also became a strain as people began taking advantage of his kindness and thought of him as a "yes-man," however, he eventually corrected that after he decided to help tutor Aki Mikage (his love interest) to boost her grades; he has since grown more confident and able to stand up for his ideals without apologies.

Hachiken is currently the vice-president of the equestrian club (rider of Maron) and responsible for a stray dog that the crew named after him, Vice-President. After he began learning the financial difficulties of farming and the plight of running a successful farm from his struggling classmates, Hachi resolves to create an ambitious business plan in attempts to win his father's approval to attain his college funds in advance to help create a brand new business model in attempt to resolve the financial strains of the Yezo community while contending with school. However, after being denied so long, Hachiken decided to start a organic pork business with his classmates.

Hachiken is a star student; he's ranked first in all of Yezo High, despite having no background in agriculture. He's overall a strong organized intellectual; he is a good problem-solver and able to organize massive projects with great success. So long as he put his mind into something he believes in, he can resolve things and make it better. On top of his original skills, his time in Yezo has taught him the basics of farming, livestock care (raising pigs, maintaining a barn, raising cows), milk processing, cheese processing, skinning and prepping game meat, breaking down a whole chicken, bacon and sausage processing, and horseback riding.

He is a boy of average build, he has brown hair, wears glasses, and often appears in a green jacket with a orange hoodie. Depending on which time of day, class, and various activities, he and his classmates are often seen either wearing an orange, red or green jumpsuit to signify their duties. During special events, he would wear a professional equestrian outfit to show his horse riding abilities. 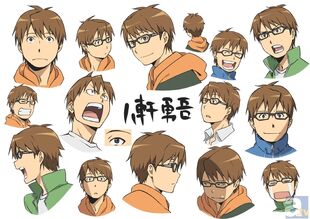 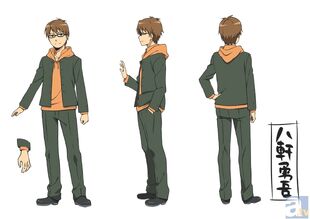 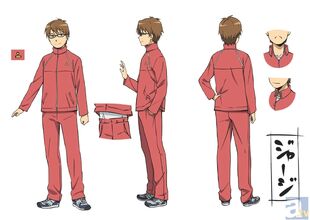 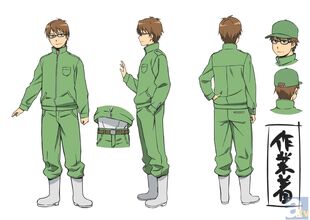 Yūgo Hachiken is the second son in the Hachiken Family and is often addressed as Hachi (a pun for the number eight) amongst friends and family. Raised in Sapporo, Hachiken grew up in an oppressive environment due to his father's strict demeanor and the constant academic competion. His father expected and demanded excellence in his sons' academic performance, and even though Hachiken did not enjoy it, getting good grades was his way of gaining validation and recognition for his existence. However, the constant need to excel proved to be a strain mentally and emotionally. It made him timid and he didn't make much friends growing up. His mother, Misako Hachiken, tried to be the peacemaker in the family and acted as buffer from his father's harshness. His older brother, Shingo Hachiken, was quite the academic achiever as well, and made it into the prestigious Tokyo University, only to quit just to spite his father and left to find his own path.

During his Shin Sapporo Junior Middle School days, Hachiken had little motivation to look forward to life. Although he strove for academic excellence, Hachiken did not have any real vision of his own future. His teacher and counselor, Shiroishi, asked about which school he wanted to attend; Hachiken didn't care which school so long as he was far from his home. Realizing Hachiken is depressed about life, Shiroishi granted Hachiken's wish and helped him apply to Yezo Agricultural High School, where he can be far away from his family. It's Shiroishi's hope that Hachiken would learn about life and gain new perspectives while he attended there. However, Hachiken's father was deeply disappointed his both his sons as he sees Shingo a quitter and Hachiken a failure to attend a better school. However, Hachiken's life would change dramatically after attending Yezo High.

Mikage is Hachiken's love interest. At first, the attraction was only one-sided as Hachiken always did kind things for her and tried to spend time alone with her, but her dense nature and the intervention of their classmates made things difficult for her to realize anything. It wasn't until Mikage's girl classmates finally spelled it for her that she realized Hachiken's feelings. When the two finally were at the same page, there were other challenges for the two to become a couple. Whenever Hachiken tries to make it clear he wants her to be his girlfriend, the male classmates would intervene to slow down his progress. Mikage actually feels unworthy of Hachiken's love as she's a low performing student and there's also her father, who threatens to kill him if Hachiken tries to get closer.

In the winter of their first year, Hachiken helped Mikage have the courage to voice her personal ambitions to her family, which brought the future of the Mikage farm into question. Hachiken feels responsible for Mikage voicing out her true desires, so he volunteered to help tutor her to ensure her acceptance into Yezo College of Animal Husbandry. Following Mikage's university acceptance, Hachiken confesses his love to her, but the many (comedic) interruptions and misunderstandings (mainly from Mikage's father) that ensued prevented Mikage from properly replying to him. However, in chapter 120 of the manga, Mikage finally admits that she has been in love with Hachiken ever since he helped her stand up to her family to pursue her dreams and agrees to go out with him, sealing their relationship with a kiss.

She then get's a turn to support him trying to get into the same university, helping Shinei Ōkawa with the pigs in Hachiken's stead as he prepares for the entrance exam. At the end of the story, Hachiken passionately proclaims that the relationship is still progressing smoothly.

Tokiwa is one of his friends in the same class/department as him. He frequently asks Hachicken to help with his math homework - which is a slow process as he only manages to get 10% in his test after intensive tutoring from Hachiken. Despite that Hachiken was always willing to keep helping him with his study.

Tokiwa also quite stupid when it comes to Hachiken's romantic relationship, often jumping into very wrong conclusion, much to his friends' chagrin. He on multiple occasions has been the cause of rumors to spread, always involving Hachiken.

Komaba is another friend that is also in his work group. He often clash with Komaba due to the differences in their upbringing and subsequently about their futures and dreams. Hachiken often thought of him as just a muscle freak. However they are still willing to help each other out when possible.

Because of Komaba's family problem with debt and going off to do part-time jobs, there was a long period of time where these two wouldn't talk as much. Komaba also wouldn't give Hachiken his contact information at first, but later was more willing to talk. Despite the distance and less contact, they stayed friends and eventually Komaba suggested working together.

Tamako's serious and business-like personality both worked well with and clashed with Hachiken's personality. She would not hold back in calling out Hachiken in his actions or perspective being detrimental to himself. In a way, her serious tone at times could resemble his father's, except she would put more time into explaining her thoughts. Her trust in Hachiken is evident by her willingness to join in the projects he keeps making/being dragged into, knowing that if he is in charge its something she can safely be a part of.

She became instrumental in Hachiken's repeated attempts to make a business plan for his father, constantly rereading and reworking it with him during their "free" time at school.

Hachiken's older brother, who got accepted into Tokyo university, one of the most prestigious university in Japan. However he dropped out of it quickly and went for cooking instead. He often gets on Hachiken's nerve as he doesn't spend a lot of effort in studying and manages to gain what he wants without much trouble, as well as popping up around him unannounced. 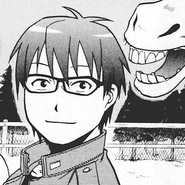 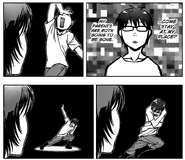 Powering through a Misunderstanding 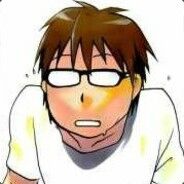 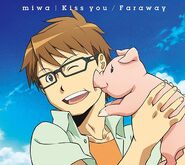 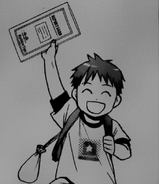