Were you looking for info on the anime adaptation called Silver Spoon? 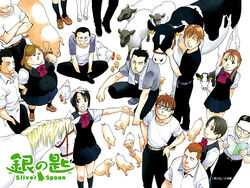 Silver Spoon is a Japanese manga series written and illustrated by Hiromu Arakawa. Influenced by Arakawa's own life experience as she was raised in a dairy farm in Hokkaido, the manga was launched on the 19th issue of Shogakukan's Weekly Shonen Sunday magazine on April 6, featured on the cover. It became one of the magazine's main features not long after. The manga ended after 131 chapters on November 27, 2019.

Set in the fictional Oezo Agricultural High School in Hokkaido, Silver Spoon depicts the daily life of Yugo Hachiken, a student from Sapporo who enrolled into Yezo fleeing from the high demands of his strict father. However, he soon learns that life on an agricultural school will be not as easy as he believed. Unlike his new classmates, he has no intention of following an agricultural career after graduating, although he envies them for already having set goals for their lives and the pursue of their dreams, unlike him.[2]

Retrieved from "https://silverspoon.fandom.com/wiki/Silver_Spoon_(manga)?oldid=5862"
Community content is available under CC-BY-SA unless otherwise noted.