One of Yugo's close friends and a skilled baseball player who dreams of becoming a professional and make use of the money earned on the league to improve his family's dairy farm. He is also Aki's childhood friend and neighbor, and their closeness is a constant source of jealousy for Yugo.

Somewhat surly face, with his roughness, but with polite honest, chivalrous personality in one side too.

He is a skilled baseball player, quickly becoming the team's ace pitcher in the first year, and has high strength and endurance. He is a decent player in ping pong, shown to play an intense game during free time with Tamako. Komaba excels in the produce subject.

Has sharp eyes with tall physique and a very muscular body. 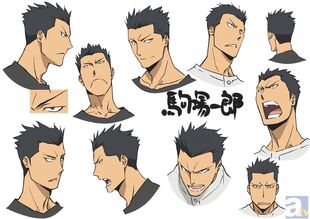 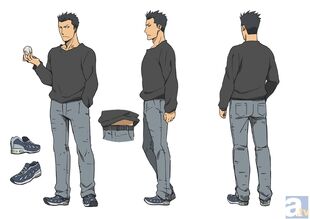 Add a photo to this gallery

Komaba's family owns a small dairy farm, which he manages with his mother and younger twin sisters. Komaba dreams of becoming a professional ball player so he can use the money he earns in the league to improve his family's farm. However, Komaba's family goes bankrupt and their farm is sold to pay their debt. As a result, Komaba is also forced to quit Yezo and look for a job to make ends meet and support his mother and sisters.

He cares for Yugo, but doesn't often show it. He hits him or kicks his legs when he praises him, making Hachiken complain. Sometime they would clash and argue due to difference in their background, but they would quickly make up afterwards (with a little help from Aki).

A childhood friend of Aki's, they get along nicely and are comfortable around each other. Aki asked Ichiro if he would like to inherit her family's farm (because her dream was to work with horses, not inherit the farm), but Ichiro declined; he said he would rather have a farm that was a "Komaba farm."

Retrieved from "https://silverspoon.fandom.com/wiki/Ichir%C5%8D_Komaba?oldid=5665"
Community content is available under CC-BY-SA unless otherwise noted.