Marie Miyake
Aki Mikage (御影 アキ, Mikage Aki) is a first-year student of Yezo Agricultural High School within the Department of Dairy Science, a member of their Equestrian Club and the reluctant heir of the Mikage family farm.

Aki is a beautiful girl with short purplish-black hair that has a small ahoge on the right side with bangs hanging on the left side and wide purplish-black eyes.

She is normally seen wearing the Yezo High School female uniform, consisting of a white collared shirt, a dark green long-sleeved coat, a green pleated skirt a lighter shade than the coat, a pink bow, crew-cut socks, and brown loafers.

During special class sessions, she is often wearing either a red, blue, green or yellow jumpsuit, depending on her duties. When horseback riding, she often wears an English equestrian outfit.

Aki is a kind but non-intellectual type; she is poor in both sensing what others around her are feeling and in academics (especially history), but as she loves horses, she shows great focus and aptitude in horseback riding and horse-related subjects. Because of her dense nature, she's unaware that several boys are interested in her, including Hachiken.

As the only child of the Mikage family, she was being groomed by her family to inherit their family farm, though in reality wanted to explore a horse-related career. Before Hachiken's intervention, Aki resigned her aspirations in the interest of the family farm; however, after Hachiken helped Aki reveal her true feelings, the family reluctantly agreed to support her to study about horses, on the condition that she graduate through college. Since Hachiken was partly responsible for letting out the truth and disappointed the Mikage family, he promised to be Aki's active tutor until she made it into Ooezo Agricultural College.

Aki grew up on a farm and worked on a combination of both farming and livestock care; on top of her Ooezo education in dairy science, she knows the basics of farming, livestock care, truck driving, processing chickens, making bacon, milk processing, cheese processing, and also has talent in horseback riding.

Aki was born into the Mikage family, a clan of farmers for more than four generations in Hokkaido. Growing up in the countryside, Aki learned the ways of farming and livestock care from her family. Aki had a deep fascination and love for horses and was part of an equestrian club in her town. Because she was raised in the countryside, she had a particular dialect, something that she was ashamed of and tried to hide when she got older. Because she's the only child in the Mikage family, the family expected Aki to inherit their farm and raised her to know all aspects of their farming operation and sent her to Ooezo Agricultural High School to continue on their long bloodline of farmers; though Aki secretly had other aspirations.

Hachiken originally planned to stay at the Ooezo dorm, until they announced the school would be completely closed for the summer. Aki invited Hachiken over to her farm for the summer as a paid part-time employee in her family farm. Aki's father actively trailed Hachiken in fear that he would try take her away from their family. When Hachiken accidentally spills a great amount of their milk, she comforts him, saying that everybody makes mistakes and telling him to take the money.

At first, Aki was oblivious towards Hachiken's romantic feelings for her due to her dense nature; her classmates often have to clue her in on what's really happening and spell things out for her to completely understand the situation. Although initially unsure of her own feelings, she eventually realizes that she does have romantic feelings for Hachiken; they mutually like each other. However, due to her father's fear tactics against Hachiken, he maintained a close-but-platonic relationship with Aki to avoid being "killed" by her father. For now, they maintain a platonic and student-tutor relationship. In chapter 120 of the manga, Mikage finally admits that she has been in love with Hachiken ever since he helped her stand up to her family to pursue her dreams and agrees to go out with him, sealing their relationship with a kiss. 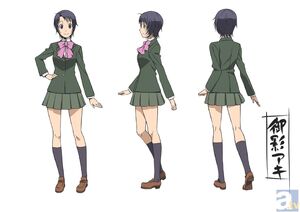 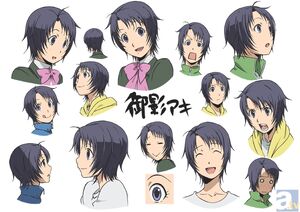